Russ and I started our Nova Scotia adventure last May in Wolfville and used the town as a base to explore the Annapolis Valley for a couple of days before moving on to Lunenburg and Peggy’s Cove.

We landed at Halifax Stanfield International Airport, got in our rental van (a Chrysler Town & Country minivan which I’ve now driven around three provinces), and drove 100 kilometers northwest to Wolfville to start our trip. Wolfville is home to Acadia University

We headed straight for a pub lunch at Paddy’s where I indulged in a pint (maybe two) of wild blueberry ale.

When it was time to check in, we headed down the road to The Blomidon Inn. She’s a grand, old, English Victorian Inn with 31 individually decorated rooms and a beautiful dining room with a modern menu.

This would be our base of operations for two nights. 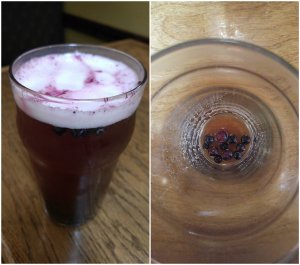 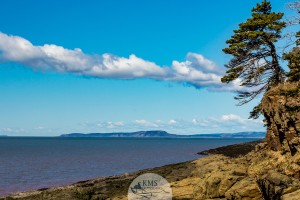 We contemplated hiking the Cape Split Trail but quickly realized we wouldn’t have enough time to hike (nor did we have the right footwear for it) and see Annapolis Royal in one day. So we opted to shoot photos along the Bay of Fundy while the world’s highest tide was out. When we go back, we’ll be prepared to hike.

After an hour of shooting we hopped back in our road trip machine and wended our way southwest towards the rest of the Annapolis Valley. Russ saw a smattering of cars at an unmarked turn-off not far down the road so we pulled in to see what was going on. People were out strolling the gravel bar on a lovely weekday morning in May, looking for driftwood and taking in some much needed Vitamin D. We met this artist, out looking for some inspiration in what had washed up on shore. We chatted with him for half an hour before continuing on towards Annapolis Royal. 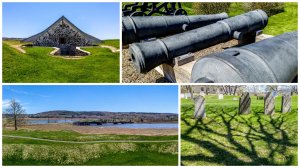 We drove the backroads from the Bay to Annapolis Royal. When we arrived, we realized just how early in the season it was. A handful of restaurants were open but empty. The Parks Canada National Historical Site Fort Anne still had two weeks to go before opening. We had lunch at the German Bakery and Sachsen Cafe. Two schnitzels please! The owners’ daughter (and café manager) Susanne sat and chatted with us as we ate ourselves stuffed. We bought pastries to go and explored the grounds of the fort across the street.

Our final stop in Annapolis Royal before driving back to Wolfville was a stroll through the Historic Gardens. While it was too early to see anything blooming, the grounds were lovely and a great way to stretch our legs before getting back in the van.

Up next: Lunenburg and Peggy’s Cove.